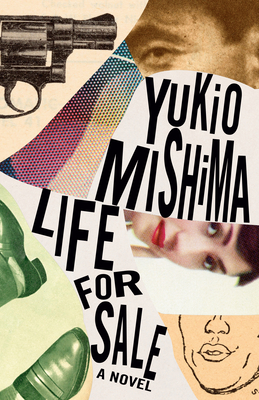 After botching a suicide attempt, salaryman Hanio Yamada decides to put his life up for sale in the classifieds section of a Tokyo newspaper. Soon interested parties come calling with increasingly bizarre requests and what follows is a madcap comedy of errors, involving a jealous husband, a drug-addled heiress, poisoned carrots—even a vampire. For someone who just wants to die, Hanio can't seem to catch a break, as he finds himself enmeshed in a continent-wide conspiracy that puts him in the cross hairs of both his own government and a powerful organized-crime syndicate. By turns wildly inventive, darkly comedic, and deeply surreal, in Life for Sale Yukio Mishima stunningly uses satire to explore the same dark themes that preoccupied him throughout his lifetime.

Yukio Mishima was born in Tokyo in 1925. He graduated from Tokyo Imperial University’s School of Jurisprudence in 1947. His first published book, The Forest in Full Bloom, appeared in 1944, and he established himself as a major author with Confessions of a Mask (1949). From then until his death, he continued to publish novels, short stories, and plays each year. His crowning achievement, The Sea of Fertility tetralogy—which contains the novels Spring Snow (1969), Runaway Horses (1969), The Temple of Dawn (1970), and The Decay of the Angel (1971)—is considered one of the definitive works of twentieth-century Japanese fiction. In 1970, at the age of forty-five and the day after completing the last novel in the Fertility series, Mishima committed seppuku (ritual suicide)—a spectacular death that attracted worldwide attention.

“A propulsive, madcap story. . . . It’s the book’s looseness and weirdness that provide its appeal.” —The New York Times

“[A] big deal . . . the first English translation of a piece of engaging pulp fiction . . . by one of [Japan’s] literary greats. . . . This surreal tale offers a trenchant critique of a city that has misplaced its soul.” —The Guardian

"Funny and horrific and curious and thoroughly entertaining. . . . [Life for Sale] should win Mishima a new generation of fans." —The Independent

“A sexy, camp delight. Beneath the hard-boiled dialogue and the gangster high jinks is a familiar indictment of consumerist Japan and a romantic yearning for the past. . . . Life for Saleis replete with Tarantino-like scenes of smuggling and murder, as well as philosophical musings on Japanese attitudes to the sword, the warrior and honour.” —Evening Standard

“This dark, funny social satire feels like something only Mishima could’ve written. . . . A slapstick comedy with a complex moral underpinning, and an intriguing departure from his introspective work. . . . Pungent insights into the challenges of postwar Japanese life are threaded brilliantly throughout.” —Publishers Weekly

“A terrific example of Mishima’s fecund imagination at its most free-wheeling and unfettered best, teeming with complex ideas about the paradoxical nature of existence, delivered with trademark panache and a winking smile. . . . Wildly comedic and filled with picaresque flights of fancy. . . . There’s more than a touch of James Bond about Life for Sale.” —The Japan Times